A Historic Inflection Point In Capitalism’s Battle Against Climate Change

In a major announcement that earned coverage from such august outlets as the BBC and the New York Times, Carbon Engineering – a firm I highlighted in the article Capitalism vs Climate Change: The Case of Carbon Engineering  – revealed it had received a game-changing $68 million investment in its innovative direct air capture technology.

Direct air capture – for readers new to the topic – is a process of extracting carbon dioxide directly from the atmosphere. Carbon Engineering’s technology allows the captured CO2 to be sequestered underground, used in industrial processes, or even processed into transportation fuel.

Without hyperbole, I believe this investment marks an important turning point for our civilization, not unlike one that occurred 165 years ago.

In 1854, London’s Soho district was suffering intensely from an outbreak of cholera, a nightmarish disease that had blossomed side-by-side with the Industrial Revolution. The Soho outbreak was just one of many between 1840 to 1860, when an industrialization-induced rapid increase in population density brought about unspeakably unsanitary living conditions for slum-dwelling factory workers. 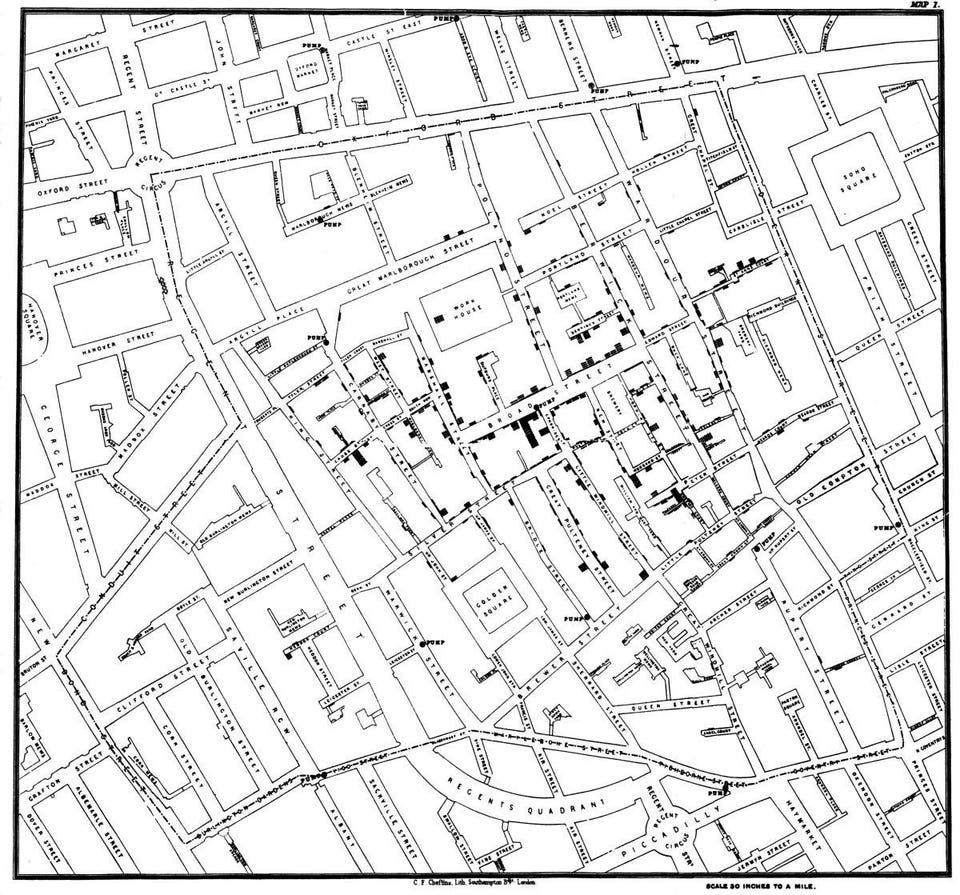 John Snow, an English physician (not the Game of Thrones character), analyzed the locations of the Soho deaths and concluded that the cholera outbreak was related to the water from a single well.

Snow’s recommendations to decommission the well and institute a strict policy of boiling drinking water eventually paved the way to the water treatment technology that now, for instance, allows 8.6 million people to live in relative health and safety within the five boroughs of New York City.

Population density had created an environmental problem that, had it been left unaddressed, would have derailed the Industrial Revolution.

In the present day, the energy density of fossil fuels and their burning has led to an environmental problem that, were it left unaddressed, would catastrophically degrade the earth’s capacity to support human life, let alone maintain the economy.

The $68 million invested in Carbon Engineering – a good part of it by carbon miners Occidental Petroleum, Chevron, and BHP – will allow the company to begin the process of creating the infrastructure necessary to “treat” the atmosphere in the same way that modern sewage systems treat waste water.

Stop reading now, pull out your smartphone, and use the calculator function to figure what the percentage increase is from $68 million to $1 Trillion.

Just as John Snow’s insight into the root cause of the Soho cholera outbreak was derisively dismissed by leading physicians at the time, today some environmental “purists” seek to dismiss the phenomenal advances Carbon Engineering and its competitors are making in the field of direct air capture.

Allow me to retort.

You and I are sitting in the middle of the ocean in a small wooden fishing boat that has sprung a major leak. In the boat, there is a bucket and an inflatable life raft. There is no situation imaginable in which it doesn’t make sense for me to bail out the water while you blow up the inflatable.

Carbon Engineering is allowing humanity to start bailing; this does not imply we should stop working full speed on blowing up the inflatable – transitioning to renewable energy sources, radically improving energy efficiency, and making changes to our societies that allow us to live well with less.

One of the things that purist environmentalists are upset about is that Carbon Engineering’s technology is being applied to enhanced oil recovery (EOR) projects. Oil companies trying to extract oil from old, difficult-to-exploit wells will pump CO2 captured by Carbon Engineering into oil-bearing geologic formations to push the oil to the surface.

While it may seem counterintuitive to use carbon capture to extract hydrocarbons, it makes sense for two reasons: first, somewhere around 97% of our transportation infrastructure runs on oil-based fuels — we cannot simply stop using these fuels, and transitionary technology is years away. Second, EOR using captured CO2 actually represents a net negative carbon emission. In other words, using Carbon Engineering’s captured CO2 to extract oil is actually better for the planet than leaving the oil in the ground!

EOR is increasingly important to big oil firms since exploiting difficult to extract but known reserves is easier and cheaper than finding new reserves (which are most likely situated in inconvenient places, like buried under 22,000 feet of ocean and rock). In addition, oil firms doing business in California must demonstrate continual year-over-year reductions in the carbon intensity of fuels sold there. Using Carbon Engineering’s CO2 for enhanced oil recovery fits that bill to a “T”.

Carbon Engineering’s CEO, Steve Oldham says that the $68 million investment is earmarked to turn the company’s experimental plant in Squamish British Columbia into a fully-functioning R&D center – tying together what exists now as separate, manual steps into a fully automated production facility. Simultaneously, the company is expanding its payroll several-fold to design large-scale commercial facilities for influential, deep-pocketed paying customers.

In a word, the company is starting to scale.

It’s an exciting process to witness and a fabulous time to be a Carbon Engineering investor. In my next report about the firm, I’ll summarize the thoughts of a family office portfolio manager, several institutional investment funds, and a strategic investor — all of whom invested in this funding round –about what gave them the comfort and conviction to risk capital in an emergent technology like Carbon Engineering’s.

Investing in companies focused on mitigating and adapting to the reality of climate change is the only way to build and preserve intergenerational wealth in the 21st century. Intelligent investors take note.