Capitalism Vs. Climate Change: The Case Of GlassPoint Solar

If you ask most people how we will get to a zero-carbon world, they’re likely to talk about electric cars and wind farms.

However, climate cognoscenti know that the two largest contributors to climate change are industrial processes and agriculture, whose greenhouse gas (GHG) emissions make up around one-third and one-fourth of total emissions, respectively.

To truly make a dent on GHG emissions, we must find companies that are impacting these areas. Over the last few weeks, I found a firm that is consistently working to lower the carbon footprint of the industrial sector: GlassPoint Solar.

When you think of solar, you probably think of the panels on top of suburban roofs. These photovoltaic (PV) arrays absorb the sunlight and convert it into electrical energy. However, there is another solar technology that is more direct and powerful: Concentrated Solar Power (CSP). 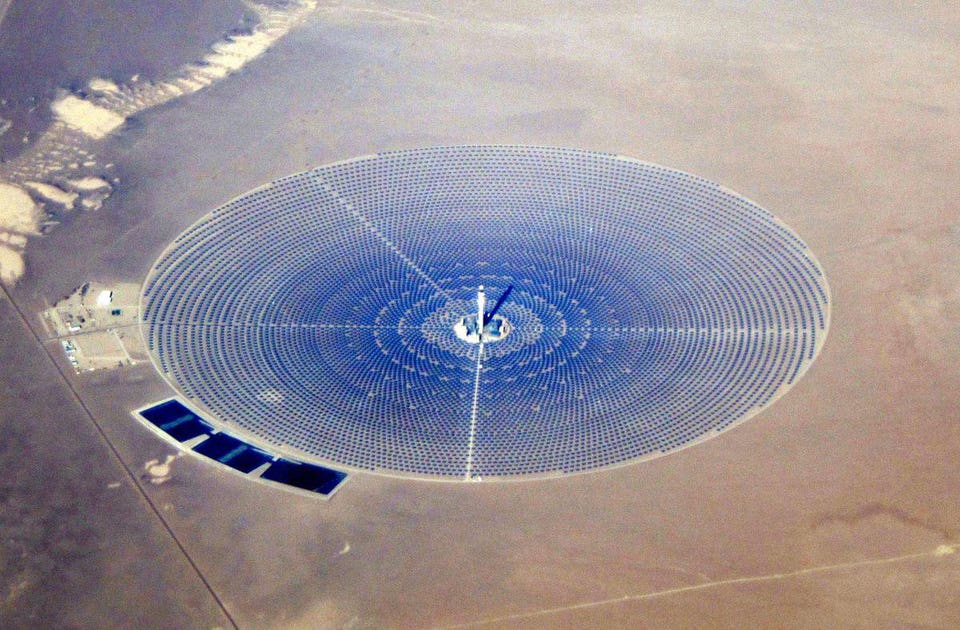 Crescent Dunes Solar Energy Installation, situated in Nevada, uses its CSP array to heat molten salt flowing in the tower at the center of the array. Heat energy is stored in the molten salt and can be used to power steam generators.SOLARRESERVE VIA WIKIPEDIA

CSP arrays do not absorb light but reflect it, concentrating a sliver of the sun’s energy onto a single focal point. A pipe placed at that focal point contains some material which heats up as the reflected light hits it. That heat energy can either be stored for later (in which case, molten salt is the material of choice) or can be used to do work (in which case, the pipe is filled with water that turns to steam).

GlassPoint Solar has spent the past several years developing a unique approach to CSP that generates steam for oil companies engaged in Enhanced Oil Recovery (EOR) – the process of forcing heavy oil out of difficult-to-extract formations. One widely-used EOR technique burns an enormous amount of natural gas to produce steam to be forced into oil wells; by using solar energy instead, the natural gas can be diverted to other uses.

Environmental purists would like to see human civilization move immediately away from hydrocarbons so the thought of providing solar power for an oil mining operation might strike you as jarring. If so, I encourage you to get over it. Our modern civilization runs on oil and GlassPoint’s technology allows us to extract this vital commodity without burning hydrocarbons in the process. That’s a win in my book – at least in the short term.

There are a few reasons I see GlassPoint as a particularly attractive investment.

First, I like that the company uses well-understood technology. CSP installations began being developed in the 1970s; GlassPoint encloses its CSP reflectors in a greenhouse structure and greenhouses have been around since the Victorian era. 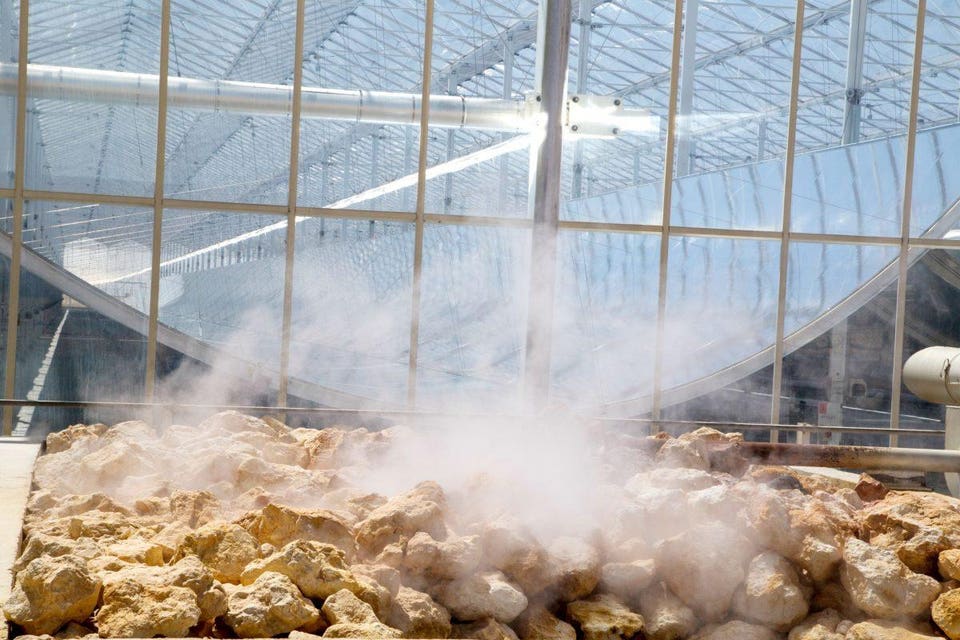 Combining these two well-understood elements in a novel way to solve a business problem puts GlassPoint’s technology in a category I find particularly attractive: Novel Adaptation.

Firms exploiting known technology in a novel way carry much less technology risk – it’s easy to find engineers, cheap to buy or manufacture parts, and simple to find detailed academic work regarding various steps in the processes at hand.

The potential returns for firms developing Novel Adaptations are also attractive since they have a natural first mover advantage when and if the technology takes off and moves into the mainstream. Allocating capital to companies with reduced risk and the potential for outsized returns is not a bad way to invest…

Second, I like GlassPoint because it provides a real solution for client pain points.CSP arrays work best in extreme environments: deserts – with a lot of sun and not many clouds. Deserts are harsh places for industrial equipment; CSP reflectors move to follow the sun as it passes overhead and must be built sturdily to keep the mirrors’ reflected light firmly directed at the focal point.

Building an array of reflectors that are both movable and strong in the face of sandstorms and high winds means that the cost of CSP displays has always been high. Enclosing the array in a sturdy greenhouse reduces the weight and complexity of the reflectors themselves and cuts down the capital expenditures necessary to build the installation overall.

In addition, unprotected CSP reflectors lose about 2% of their optical efficiency per day in areas with a lot of dust. Reflectors are typically cleaned manually once a week, meaning they are nearly 15% less efficient by the time they finally get scrubbed off. In contrast, GlassPoint automatically cleans the exterior of the greenhouse every night using robots. This allows for operating costs to be lower and for optical efficiency of the reflectors to remain high.

From a client’s perspective, then, contracting with GlassPoint means that clients 1) save money by switching away from natural gas for EOR, 2) save money on capital expenditures, and 3) save money on operating costs. 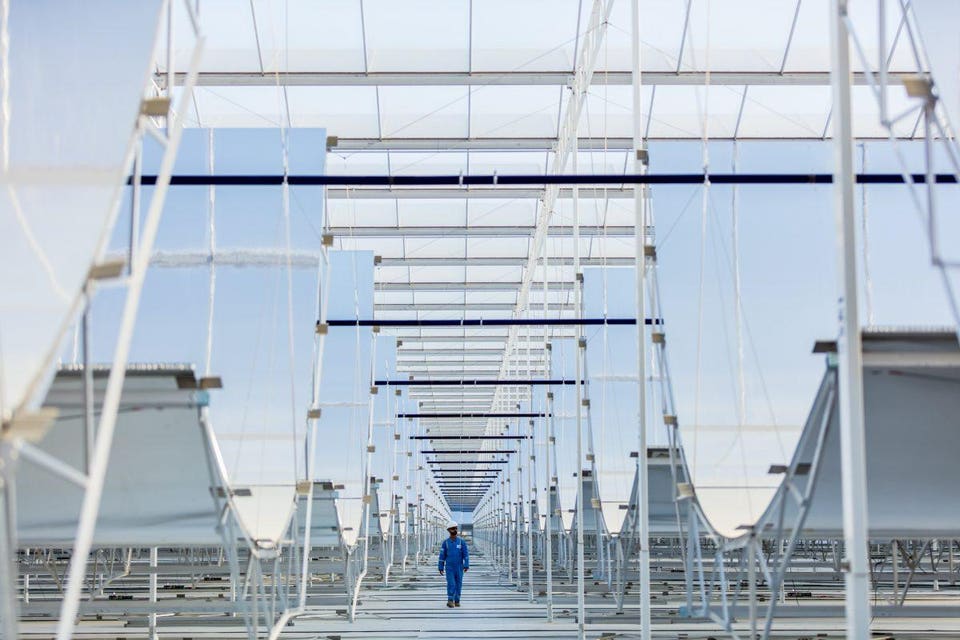 A worker walking through the Miraah facility. Note the trough-shaped reflectors and the roof of the greenhouse. Source: GlassPoint SolarGLASSPOINT SOLAR

By solving these pain points, it’s no wonder GlassPoint has some big, important clients.

Last, I like that GlassPoint is well-run and staffed by capable, seasoned industry leaders. A generation of young software entrepreneurs created enormous value for their investors, but it does not follow that all start-ups must be staffed by 20-somethings. 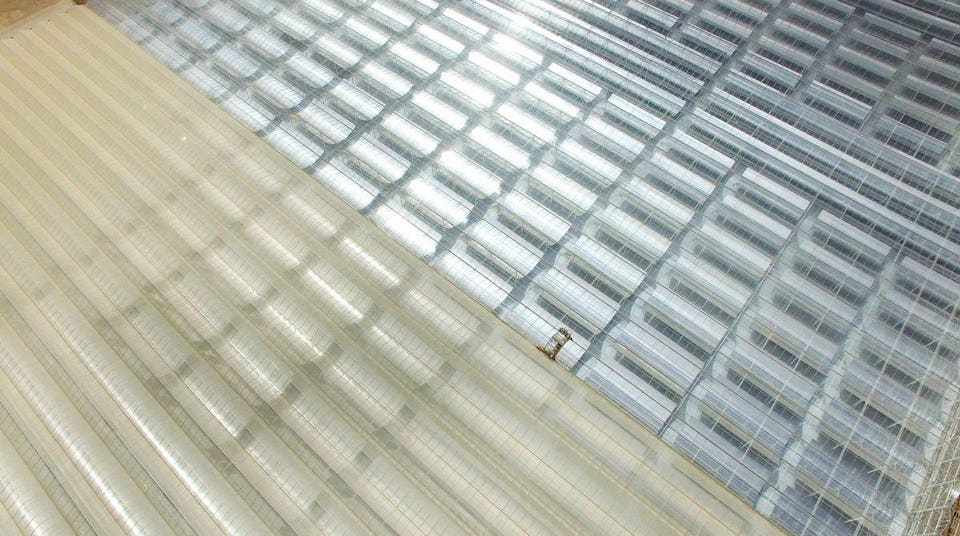 The difference between a dusty array and a clean one is clear in this photo. Note the robotic window washing machine traversing the last row of the clean part. Source: GlassPoint SolarGLASSPOINT SOLAR

In the infrastructure world, experience, time-in-grade, and plenty of practice executing complex, multi-phase projects from initiation to completion is essential. Steven Moss became GlassPoint’s CEO about a year ago. He is a 30-year veteran of Alstom and General Electric (after the latter acquired the former), where he ran the multinational’s renewable steam generation business.

Moss maintains that GlassPoint’s largest and most ambitious project to date – the 1 GW Miraah project in Oman – has hit each of its intermediate milestones on time and on budget, despite being sited in a very challenging and remote area. For a start-up to take on such an ambitious project and to deliver on its promises, rather than providing a stream of excuses and delays, is…refreshing.

While GlassPoint has thus far focused its business exclusively on EOR, there are a myriad of other uses for industrial heat, including power generation and desalinization. Moss is planning an expansion into other industries, both domestically and foreign.

Climate change is the biggest issue to face humanity since the Iron Age. Investing in the companies that allow civilization to meet the challenges of the new climactic paradigm is the only way to build and maintain intergenerational wealth in this century. Intelligent investors take note.