Feeding The World With Plastic

There are two effects of climate change that anyone who eats food should care about: arid soil and torrential downpours.

While it seems like the two effects are mutually exclusive, in fact, they are related.

Plant and tree roots bury into the soil and grab onto it. When plants die or are uprooted, their grip on the soil releases. Once the grip is released, heavy rains are much more likely to wash the topsoil, full of decaying plant matter and other organic nutrients, into rivers and oceans. 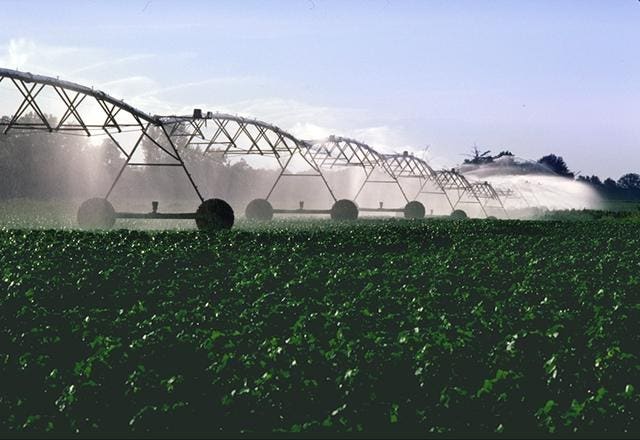 Pivot irrigation is common in the U.S. Source: Wikipedia

With higher atmospheric temperatures, soil is becoming more arid and plants are under greater risk of suffering water stress. At the same time, hot air holds more water vapor, so moisture that would otherwise be stored in the soil is now hanging over all our heads like a soggy Sword of Damocles – occasionally unleashing damaging torrents of rain that bring about erosion and damage or ruin crops.

According to the United Nations, 70% of freshwater resources worldwide is used in agriculture. As fields become drier, there will be a natural increase in demand for water, especially from farmers growing succulent, water-intensive crops like tomatoes, strawberries, and melons.

The problem with conventional irrigation techniques is that spraying water on crops is not efficient – much of the water evaporates and some portion of it falls too far from the crop’s root system, nourishing weeds. To control the weeds being watered through irrigation practices, the farmer must use herbicides; these herbicides have their own impact on the health of the ecosystem and the quality of freshwater sources.

Luckily, a solution to these issues exist in the form of a type of agriculture invented in the U.S. and now practiced extensively on the arid croplands of Spain: plasticulture.

One example of plasticulture is the application of plastic sheeting, called plastic mulch film, over the soil, paired with a flat, flexible tubing called “drip tape”, which can be buried a few inches underneath. Farmers open a small slit in the plastic mulch at regular intervals when they plant, keeping the rest of the row covered by the plastic sheet

The advantages of this form of plasticulture are enormous.

The steady but minute amount of water released by the drip tape provides nourishment directly to the crops’ roots, so is not lost to evaporation. Fertilizer can also be mixed with the water flowing through the drip tape, allowing for much more precise and efficient (i.e., low cost) application and reduced run-off into the water table.

The plastic mulch hugs the soil, keeping it within a steady temperature range, and traps water within the beds near the roots. Using different colors of mulch can either warm the soil (black mulch) or keep it cool (white mulch), allowing for multiple crop cycles in a single year. In addition, weeds’ seeds germinate under the plastic mulch and die for lack of sunlight, cutting the need for herbicide.

Some manufacturers have started to infuse their plastic mulch with insecticides, also cutting down the amount of insecticides needed to be applied. Finally, intensive, year-round farming can encourage the growth of harmful nematodes in the soil that can devastate a strawberry crop, for instance. One of plastic mulch’s side benefits is that it traps the harmful chemicals (the same mustard gas that killed soldiers in WWI) used to control those harmful organisms during the fumigation process.

When the plants start fruiting, the produce sits on top of plastic rather than being surrounded by soil. This increases the quality of the crop by cutting down on wasted produce and limiting soil-borne disease (remember when all romaine lettuce was removed from shelves because of E. coli poisoning?).

The results speak for themselves. One industry expert estimated that a tomato farmer using plasticulture was 50% to 100% more productive than a farmer growing crops the old-fashioned way on the same field. What’s more, by using plasticulture, what would otherwise be marginal land (e.g., the arid regions of Spain) can be used to economically produce crops.

If we think about the demands on the food system brought by the global population’s increase from 7.5 billion people to 9.0 billion around 2050, plasticulture seems like a no-brainer: much higher yields, much lower water usage, much less harmful runoff caused by overapplication of herbicides and pesticides.

However, plasticulture is not without its problems, and the main problem is waste.

One person with whom I spoke told me there is at least 55,000 tons (equivalent to around eight Eiffel Towers’ worth) of used agricultural plastic sitting in landfills and dumpsites in Florida right now. Some dumpsites are so large, they can be seen from the Space Station.

These ag plastics also create an economic burden for farmers. The mulch and drip tape is not cheap, and large farms spend tens of thousands of dollars at the beginning of the season to buy these consumables (many of which are designed to be used for only one season).

At the end of each season, farmers must pay for the single-season mulch to be pulled up, wrapped and transported to a dumpsite, where again they must pay to get rid of it.

A potentially valuable resource is being cavalierly dumped and buried in the U.S. and burned in South American countries whose environmental laws are laxer.

Ag plastics are, in fact, a perfect example of the issues inherent in a linear economy that I wrote about in a recent article. A valuable resource is being treated as a waste product and discarded, creating ecological and economic problems of its own. Senseless!

A few things might be done to allow plastic to feed the world in a way that would not damage the environment:

There have been advances in the materials used in plastic mulch, but when the plastic gets too thin, it rips easily, cannot be pulled up in one piece, and doesn’t have the same degree of benefits that a thicker plastic has.

Biodegradable mulch is very expensive – one executive with whom I spoke estimated three to four times higher than other mulches – and it tends to be less durable in harsh environments than non-biodegradable varieties.

The good news is that I have recently found a small private company that has found a solution for the technical shortcomings of the present generation of mulches and has a viable plan to create a cradle-to-grave, circular economy-style business that will address the problem of agricultural plastic waste.

This is the type of company that intelligent investors should be looking for to generate and maintain intergenerational wealth under the new climactic paradigm. Plastic mulch may not sound sexy but feeding the world in a harsh and unforgiving climate will be much more valuable than a time-wasting mobile phone app in days to come.

Many thanks to Dr. Mike Orzolek, Professor Emeritus of Agricultural Sciences at Pennsylvania State University, for his generous time and help in researching this article. Any misstatements are the responsibility of the author alone.