The prominent Cincinnati entrepreneur and investor, Tim Schigel – founder and managing partner of Refinery Ventures – piqued my interest when he told me about an innovative company in which his firm invested at the end of last year – Winston Privacy.

Winston Privacy combines a hardware device with a subscription offering that allows Winston’s users’ Internet browsing to remain free from the prying eyes of what some privacy advocates believe are two of the most dangerous firms on the face of the earth – Google and Facebook.

While Winston’s concept seemed cool, I originally didn’t see a climate change investing angle. It turns out there is! Read on…

Your smart TV is watching you, your smart speaker is eavesdropping on your conversations, your Roomba is mapping your house, and your fitness tracker has some information for which your health insurer might pay handsomely.

The smart device market is an outgrowth of years of the tech world’s refinement of techniques to glean information from consumers’ online actions and use that information to predict consumers’ mindsets and future actions.

If you want to understand just how pervasive and potentially oppressive the data collection in modern life is, watch the Netflix documentary, The Great Hack or pick up a copy of Shoshana Zuboff’s excellent (though academic) tome, The Age of Surveillance Capitalism.

Winston’s founder, Richard Stokes, is an engineer’s engineer, a successful entrepreneur (founding a digital advertising intelligence firm – Adgooroo – and selling it a few years later to the world’s largest advertising agency, WPP), and an expert in digital privacy.

Stokes developed his expertise in privacy while working as the Head of Innovation for WPP’s Kantar division. In that role, he was shocked by how much intensely private information we consumers voluntarily hand over to tech companies every day, and also by how much intensely private information tech companies can wrest from us without our even being aware.

In 2017, Stokes began work on his Winston device. The sleek, plug-and-play Winston hardware sits between consumers’ modems and routers, protecting their privacy by anonymizing information requested and delivered to all the connected devices on their network – computers, tablets, smartphones, and IoT gadgets.

This anonymization process is carried out through a novel method for creating a peer-to-peer network of Winston devices that makes it impossible for companies to connect personally-identifiable information with any given Internet account. 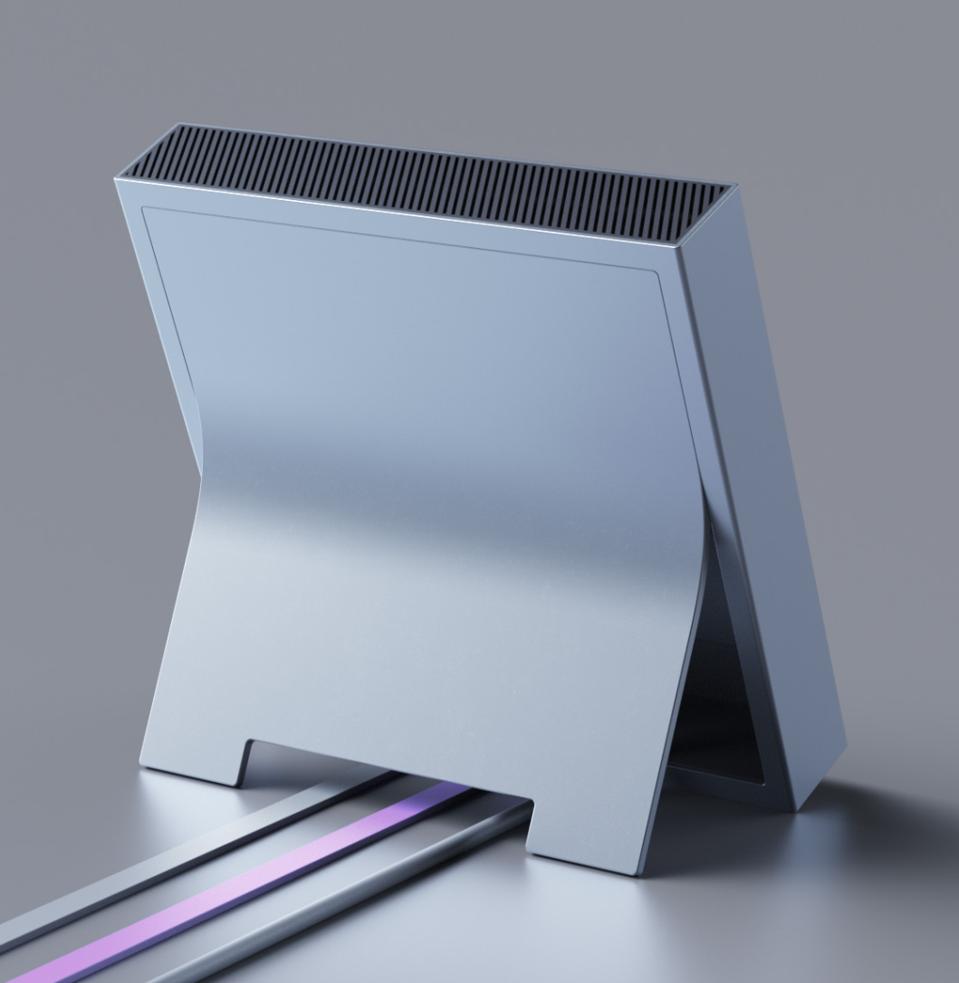 Stokes took great pains to make sure the Winston Privacy device was easy for mass market users to install. Plugging in the power cord, a cable from the modem and another to the router is all it takes. Source: Winston Privacy

Winston’s hardware is bolstered by the company’s integrated privacy software, which uses AI algorithms to allow smart blocking of cookies, maintains an online “blacklist” of dangerous sites, blocks digital fingerprinting, and makes sure your Internet Service Provider (ISP) can’t spy on you by encrypting the address of the sites you are visiting. (The technically-inclined can read more about Winston’s tech here.)

The end result of Stokes’ technical wizardry is that Winston’s users appear as inscrutable blank slates to the world’s would-be digital overlords. And the benefits to the consumer do not stop at anonymity – Internet surfing is a lot zippier for a Winston user simply because online companies cannot load your browser with the digital equivalent of the Sunday paper’s advertising section.

After reading Zuboff’s book, I started researching how I could control my digital privacy myself, but eventually realized the time and expertise required to do so exceeded my capacity. I did what most people do at that point – I threw up my hands in resignation.

After learning about Winston Privacy, now I know that I have a cheap, technically sophisticated weapon to protect myself.

So, how does this discussion relate to climate change? I see two tie-ins – one direct and the other indirect. Both are vitally important.

When an Internet user visits a site, an army of tracking algorithms immediately glom onto that user and start extracting bits of information. This flurry of activity is almost invisible to us as users – some sites seem to take a little longer than others to load, but with today’s fast processors and high bandwidth, usually the lag is not too noticeable. 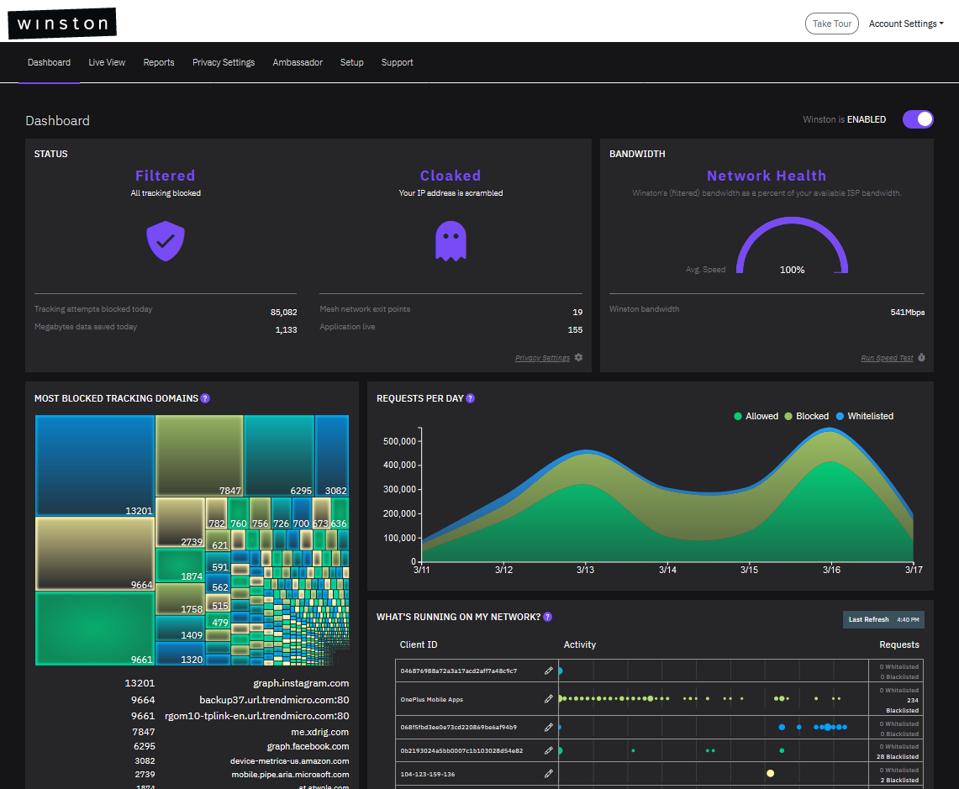 However invisible to us, that flurry of algorithmic activity is most certainly not cost-free. It requires vast computing resources supplied by powerful Cloud servers as well as increased burden on Internet routers from having to pass through all the data being collected. This computing power adds up – Stokes estimates that roughly 50%-70% of present Internet bandwidth is channeled to powering the algorithms that track us.

The added bandwidth burden represents the direct effect of surveillance capitalism on climate change. Were Winston devices to become ubiquitous, we would see a measurable reduction in energy needed to run data centers worldwide. That’s a big win.

The indirect effect of surveillance capitalism on climate change relates to the dynamics of information dissemination discussed in the Netflix documentary and book mentioned above.

There is voluminous, overwhelming, and excruciatingly well-researched scientific evidence of anthropogenic global warming (AGW). Despite the strength of this evidence, there still exists a material (though thankfully shrinking) proportion of the U.S. population that believes the science of climate change is unsettled and subject to doubt.

The key characteristic of surveillance capitalism is the ability for a tech company to understand the mindset of a consumer and predict how that consumer will react to various marketing messages. 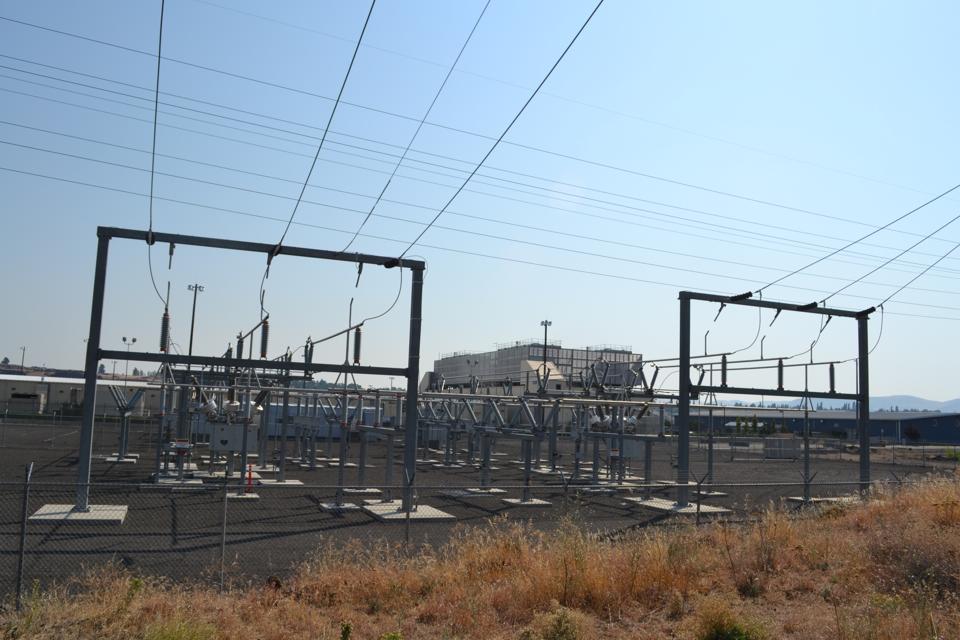 A Google data center in The Dalles, Oregon. According to Wikipedia, the energy density for a data center can be 100x that of a typical office building. Source: Wikipedia

The organization behind the “truth” message may, in fact, have its own agenda that has nothing to do with objective, scientific truth. As long as it has the monetary resources to pay for the services of the Internet advertiser, though, it can spread its message.

Organizations with their own agendas regarding the causes and effects of AGW are very well-funded, and are using the funding to sow doubt and confusion in the minds of voters and policy makers alike.

The quicker our civilization becomes broadly aware of the truth of AGW and the threat it poses in this century and beyond, the quicker significant political pressure can be leveraged to solve the daunting problems in front of us.

In my mind, Winston Privacy provides a mechanism to start to turn the tide in our civilization’s increasingly high-stakes battle against purveyors of purposeful disinformation. It does this by starving surveillance capital companies of the raw material on which they have built some of the most valuable companies in the world – detailed information about consumers’ personal preferences and biases.

Capitalism is the economic expression of human’s greatest strength – adaptability. We must leverage capitalism’s inventiveness and drive now to adapt to the many daunting problems created by our warming planet.